Today we embarked on our adventure – us, three dogs and about 800 pounds of gear. Our first stay was at Rye Patch State Recreation Area in the middle of the Nevada desert, about 50 miles outside of Winnemucca. I was a little nervous as we approached what seemed to be just another spot in the vast desert wasteland. In fact, there is a reservoir there. The campgrounds are nicely laid out, the facilities were clean and convenient and it wasn’t at all what I thought camping in the desert would be. The weather was gorgeous. We enjoyed rather mild temperatures under nice shade trees and the overnight low was actually rather cold. The bugs were very few as well (no mosquitos, flies, etc.), just the occasional swarm of gnats and very cute bunnies who frequented our campground.

So what did I cook in this little oasis? Fajitas, of course! And I even served them on fresh tortillas made over the fire! My trusty tortilla press gave out but I still made it work. How do you even break it in this spot!?! The fajitas are were so yummy! It was already dark when we ate so I didn’t have a picture of the final product, but I will tell you that the leftovers were even awesome in scrambled eggs the next morning.

Mix carne asada, seasonings and lime in a bowl and let marinade. Mix bell peppers and onions together in another bowl and sprinkle with a pinch of salt. 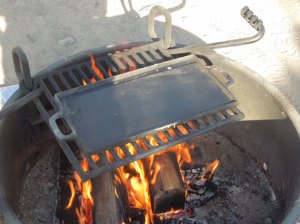 Preheat griddle over the fire to high heat. Prepare corn or flour tortilla dough (or bring premade tortillas if you like), cook tortillas and set aside in a covered dish.

While griddle is still hot, heat the vegetable oil and then place meat and vegetables on the pan (careful – it’s HOT!) and let cook, stirring with a long spatula for 5-7 minutes or until meat is to your liking and vegetables are charred on some of the edges but are still crisp.