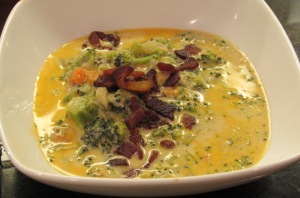 This thick, hardy, rich soup recipe is so full of flavor, warmth and texture, your family will forget they just gobbled down a bunch of broccoli! I’m a huge fan of soup. At restaurants, I almost always inquire what the soup du jour is, just in case it’s something yummy.

This week, broccoli was on sale at my local Mi Pueblo and a had a few extra slices of bacon left in the fridge so I thought soup might be in order. It totally was! There wasn’t a drop of soup left either. I didn’t have any fancy French bread to accompany it but I did have a leftover Asiago bagel so I decided to make a little crostini to go along with the soup. The flavor combination was great!

If you are vegetarian, simply replace the bacon part of the recipe with a couple of tablespoons cooking oil and a tablespoon butter then add another teaspoon paprika and 1/2 teaspoon salt. I’ve made this soup both with and without bacon and don’t worry, the flavor is all there! 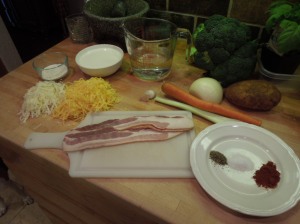 Pour water in pan and stir mixture together. Add cut broccoli crowns on top of vegetable and water mixture (do not stir), place lid on pot and allow broccoli to steam around 4 minutes.

Remove lid, stir broccoli into water and vegetable mixture. Allow mixture to just start to simmer, then stir in heavy cream. Once the soup starts to thicken, stir in the cheese, a little at a time, making sure each addition is fully melted before adding more cheese.

Preheat oven to 425 degrees. Place sliced bagel on a baking sheet, brush with olive oil, sprinkle with Johnny’s Garlic Spread, then top with a little parmesan cheese. Place in oven and cook for around 5 minutes or until the cheese is melted and the edges begin to brown.

Remove from oven and serve with soup.