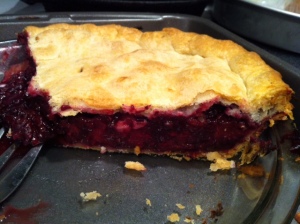 I love pie. Okay, so maybe I don’t love all pie but all pie is NOT created equal. Why? It’s all in the crust. Yes, crust may be the single most component by which I will judge an entire pie. Even a can of cherry pie filling is okay with me, so long as the crust is good.

I know what you’re thinking – “why on earth would I make my own pie crust when the cute little pudgy dough boy with the puffy chef hat makes them for me?” I know, I know, pie crust is a little bit of work but let’s face it, even a bad homemade pie crust rivals the best store bought one. And what’s wrong with having that perfect crust on your perfect pie? If you’re the kind of person that likes to make things in bulk to store in your freezer for later use, pie crust does that perfectly – no dough boy needed!

So, here are just a few tips before we get started:

Pie crust likes the cold. Ice cold water, chilled butter and I even go so far as to put my flour, salt, mixing bowl and paddle attachment in the refrigerator ahead of time so I can have that little extra edge of cold. The colder the dough, the flakier the crust. Why? Because the butter stays solid until it bakes together with the flour. So, if you are a person with naturally cold hands, you should have no problems. But if you have warm hands, you will need to take extra care on trying to cool your crust.

Blind baking: I’m a huge fan of “blind baking” my bottom crust. Blind baking is where you pre-cook the crust for a short period of time ahead of baking the whole pie. While this is normally how you would treat a single crust pie (pie with no top crust) like pumpkin or meringue, most people don’t do it for a double crust pie. I like this step because I’m guaranteed a nice bottom crust every time. Is there nothing worse than a soggy bottom crust?

Folding the crust: Any serious pie baker will tell you that “folding” the crust several times is imperative. I agree, however, ‘folding’ is where you roll out the crust, slather it in butter, fold it together, let it chill in the refrigerator for a while, rinse and repeat as many times as you have patience for. I totally agree with the concept because it produces a far superior product but I had an epiphany one day when talking to Amelia about cinnamon rolls… I thought, why not just roll it? Since then, I’ve even had more serious pie bakers demanding to know “how many times did you fold that!?!” I always share my secret, of course (secretly hoping to get some pie out of the deal).

Homemade Pie Crust For A Double Crust Pie
(for single crust, cut recipe in half)

Combine flour and salt together, then cut in 1 cup of butter (save the 1/2 stick for later) until incorporated but pieces of butter remain. Check this out – here is a photo of how it should look – notice the little flat looking “wafers” of butter? Stop mixing!

Next, add in water, a tablespoon at a time just until dough starts to come together and start to look like big curds. Stop mixing! Collect all the dough into a ball, flatten the ball, wrap in plastic wrap and put in the refrigerator for at least one hour.

When fully chilled, on a lightly floured board, roll dough out to around ¼ inch thick. Using a vegetable peeler or sharp knife, cut the ½ stick of chilled butter into very thin pieces and place on dough, covering evenly. Starting at one end and working your way to the other, roll up the buttered dough into a log and cut in half. Rewrap the dough in plastic wrap and return it to the refrigerator to rest another hour. Look at those swirling layers of butter!

Preheat oven to 425 degrees. Roll out one layer of crust to desired thickness and line a 9” pie pan or plate. Cut edges of dough to 1 inch from edge of pie pan. Return pan with crust to refrigerator to rest for 20 minutes (this will help prevent blind baking “shrinkage”). Line crust with tin foil and secure with pie weights or dried beans (do not cook beans for eating after use – they will taste like burned beans – trust me on this).

Bake crust in oven for 15 minutes, remove from oven, remove beans (which can be saved and reused for this same purpose) and tin foil. Let crust rest 5 minutes. Meanwhile, roll out the top crust to desired thickness. Fill bottom crust of pie (today I made blackberry pie), top with top crust, trim top crust and edges by crimping with your fingers around the edges. The top crust should be folded under into the bottom crust. Using a sharp knife, cut vent holes in top crust and return pie to the oven. Bake 40 minutes to one hour (depending on filling) or until the filling starts bubbling out of the vent holes in the top of the pie. Do you like a little shine on your pie crust? Brush the pie crust before, during and after baking with a little milk. Let pies rest at least 15 minutes before serving so that filling has time to set up and crust has time to rest.

See, it’s not all that scary (unless you are a cardiologist – don’t worry, I won’t tell). And the good news is that you can totally make this ahead of time. Want to have your own frozen pies ready to pop in the oven when you want? Blind bake the bottom crust and freeze in the pan. Fill with thoroughly chilled ingredients, top with the top crust and return to the freezer. Once frozen, wrap your pies in plastic wrap, then tin foil. To reheat, preheat oven to 425 degrees, poke vent holes with a sharp knife and cook 60-70 minutes. What a great way to preserve the abundance of the season! Fresh peach pie in January? No problem!

One thought on “Buttery, Flaky Homemade Pie Crust From Scratch”