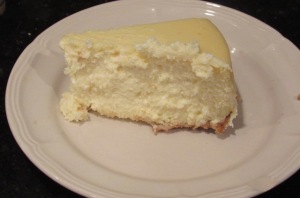 For my brother-in-law, James’ recent birthday I was tasked with the honor of birthday cake bringer. James luuuuuuvs cheesecake so I set out on a mission…

Cheesecake, in its many and varied forms has existed pretty much since man first made cheese. After all…cheese AND pie. Right???? I’ll admit it – I’m hard to impress with cheesecake. The Jell-o no bake is just, well, Jell-o. I knew the first step in my quest had to be to contact my friend Judi – an awesome wife, mother, grandmother, artist and, of course, cook! I remembered the cheesecake she made for her husband Barry’s birthday some years back and I knew I had to have that recipe.

Judi was happy to accommodate and even shared a really cool back story with me about the recipe. After college, Barry worked for Hallmark Cards for a few years. One of his accounts was Valona Pharmacy at 2nd and Pamona in Crockett, CA (now a Cary’s Design location). Valona’s Pharmacy owner, Jan gave the recipe to Judi and told her it was from Lindy’s in New York. I decided to do a little research myself on just how this delicious cheesecake came about.

The immediate thing I note on the internet in all of the Lindy’s “copycat” recipes is that none of them call for cottage cheese and the one Judi has does. Interesting. Why would that be? It turns out that a German-Jewish immigrant, Arnold Reuben, who is largely credited with the modern-day popularization of cheesecake, first tasted “cheese pie” at a dinner party. He asked the hostess for the recipe and proceeded to play with the ingredients, substituting cream cheese for cottage cheese. Ah ha! So maybe I hold the first original Lindy’s recipe?

So I decided to have not just cheesecake for James birthday but a full-on cheesecake showdown. The Lindy’s recipe versus a recipe from The Gourmet Cookbook Volume 1 from 1962. Lucky for me both cakes came out nearly identical in appearance. I decorated both of them the same and let the party-goers judge which they liked best. I added a few sauces for the non-purists: chocolate sauce, caramel sauce and cherry pie filling. 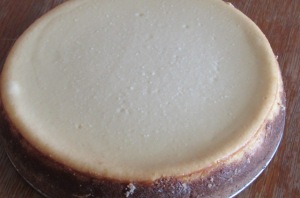 And now the Gourmet Recipe…

Line a springform pan with buttered zwieback crumbs or with other dough. (I used a standard graham cracker crust on both cakes.)

And the winner was…Lindy’s by a landslide!

Thanks so much to Judi for sharing this great recipe and story!

One thought on “Cheesecake Showdown”