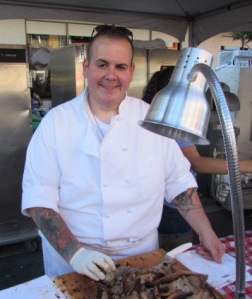 If we had to pick four words to describe Chef Robert Hesse, they would be: open, honest, humble, and gracious. It was our great pleasure to see this two-time Hell’s Kitchen contestant and Assistant Executive Chef working at The Brews Brothers restaurant in the Eldorado Casino Hotel in Reno, Nevada. Chef Hesse is perfectly comfortable working a street party, which is where CPM met him, cutting brisket for an estimated 50,000 hungry festival-goers at the 19th Annual Great Eldorado BBQ, Brews & Blues Festival. 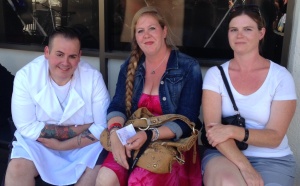 Chef Hesse is probably best known for his time spent on Seasons 5 and 6 of Hell’s Kitchen, but after the cameras are gone, each contestant continues with their lives. There has been no shortage of work for this Hell’s Kitchen Fan Favorite. He has cooked for many as an Executive Chef, judged competitions, cooked for celebrities and at the Playboy Mansion. He has also been blessed with a son who is now two, and is looking and feeling like a new man.

When asked what he likes to cook for himself, he responded, “I’m more of a ‘Street Sheet’ chef. I’d rather cook a really good burger and some home fries than any of that foofy shit,” says Chef Hesse, who, after two seasons on Hell’s Kitchen and working in some of the finest restaurants in the country, still loves real comfort food. “All of the big name chefs – ask them what they want to eat at the end of the day and 99 percent of them will tell you – comfort food.”

Chef Hesse was more than candid with us about being a celebrity chef. “Being a celebrity chef is like being the new rock star. People think it’s easy but it’s hard work. Cooking is the job they used to give to prisoners when they got out of the joint because nobody else wanted the job. You stand on your feet 15 hours a day over a hot line, grilling steaks or cutting brisket,” he says as he rubs his obviously care-worn hands. Chef is definitely no stranger to hard work. The Brews Brothers cranks out an impressive 500-2500 plates each day. The fires of Hell’s Kitchen aren’t behind this chef either. Hesse still keeps in touch with many of the contestants and Gordon Ramsey, who Chef describes as “Mary friggin’ Poppins – and you can quote me on that. He really does care.”

As the Eldorado’s celebrity chef, Hesse has incorporated some of his own concepts into all of the Eldorado restaurants, with the exception of La Strada. He highly recommends the Buffet “I estimate that about 98% of the items on the Eldorado buffet are from scratch. Instead of having Frank Sinatra or Tony Bennett, the Eldorado lets their food be the star.” The Carano family, who owns the Eldorado, will be opening five other properties across the country so you will see Chef Hesse’s inspiration on menus for all their restaurants. He currently has a signature dessert on the menu at Roxy’s Bar and Lounge – Night at the Movies. This sundae features Chef’s hand-crafted, popcorn flavored ice cream topped with hot fudge, whipped cream and Cracker Jacks. YUM! We’ll need a reservation for our next visit to try that! Chef also adds that the Eldorado Buffet is the best place to get mushroom ravioli.

Chef Hesse credits a lot of his success to the Carano Family, who have “fully supported me through everything. The Carano Family has been really good to me and I’m just really grateful. Gregg [Carano] is just a really good guy.” How did Chef Hess meet the Carano Family? We were surprised to learn that he met them through Muhammad Ali’s trainer, Angelo Dundee, who passed away early in 2012.

Life wasn’t always so glamorous for Hesse. “I was a troubled kid. I was a heroin addict for 15 years, I was a thief, I was at Rikers.” (Rikers is New York City’s main jail complex). Some don’t know but Chef Hesse actually was filmed for a pilot of the series Scared Straight. When asked if he thought Scared Straight helped his choices in any way, Chef couldn’t have been more relatable. “Basically, I was more afraid of being butt raped than anything. It will make you think about your choices.”

Chef is sporting a much more svelte figure these days. “I basically traded one addiction for another.” After overcoming a long-time heroin addiction, food became his new addiction. Now, with the gracious help of Western Bariatric Institute in Reno, Chef has shed over 250 pounds and 18 inches from his waistline. Western Bariatric performed his Vertical Sleeve Gastrectomy pro bono, for which he is truly grateful.

“I really did it for my son, Ayden,” who Chef adores spending time with. “I have a lot more energy,” says Chef, who, although still hasn’t set foot in a gym, enjoys taking lots of walks. The Vertical Sleeve Gastrectomy, involves the removal of a large part of the stomach and essentially gives the patient a new stomach about the size of a baby’s fist. In fact, Chef Hesse can only eat about four ounces of food at a time. “I’ve eaten a little more than that a couple of times but it makes me really sick. You could stretch the stomach back out but it would be a very difficult process – you’d have to eat like five Big Macs a day and then you’d have to be willing to throw them up right after. It would be like self-torture.”

Where is Chef Hesse headed next? Keep an eye out because he will be appearing on the Food Network in a couple of different shows (TBA). Chef credits and thanks his fans for the outpouring of support that has helped put him in touch with the Food Network. Aside from upcoming TV appearances, there is talk about an upcoming book deal.

7 thoughts on “A Candid Interview With Chef Robert Hesse”