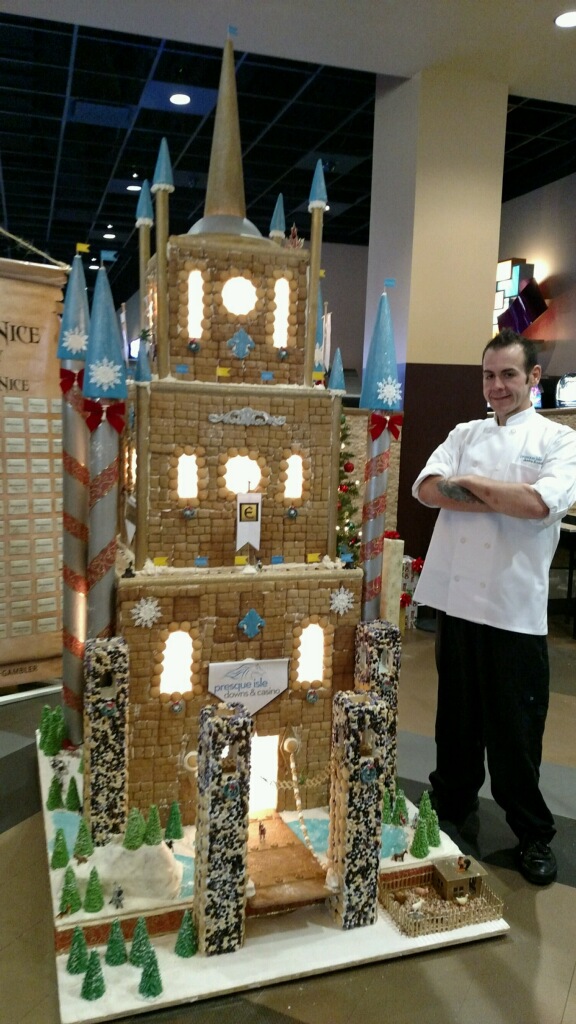 If you ask Chef Robert Hesse whether he’s been naughty or nice this year, he might tell you “both”. In fact, that is the basis for his upcoming cook book. “It’s like Jekyll and Hyde. I’ll show you how to make those comfort foods that you love, filled with butter and cream and fat, and then I’ll show you the healthy way to make that same dish. It’s about choice and moderation.” Chef Hesse certainly knows about moderation. After having gastric sleeve surgery in early 2014, he has achieved what would seem impossible to most people – he has shed more than 445 pounds and now knows that he needs to eat to live, not live to eat. He also knows that trigger foods can cause you to fall back into terrible habits, maybe it’s potato chips or ice cream, but that is something he is helping to address in his upcoming book.

Keeping busy is a big part of keeping the weight off. And busy he is! Chef Hesse has been recently promoted to the Executive Chef of Presque Isle Downs & Casino in Erie, Pennsylvania, his new home base of operations. “I love working with new staff, fresh faces, greenies – I enjoy teaching people.”

He still works each month with the other six properties owned by Eldorado Resorts. Recently, he helped launch a brand new Brew Brothers at the Scioto Downs Racino in Columbus, Ohio. It was modeled after the original Brew Brothers in Reno, Nevada and features a brick oven pizza and house made micro brews. In fact, they are working to build a Brew Brothers at each Eldorado property.

What else keeps an Executive Chef busy during the holidays? Building a seven foot tall gingerbread castle, of course! As we spoke he was working the rest of the culinary team to build a great holiday attraction for Presque Isle. With the help of a great team, they made more than 950 individual gingerbread bricks, used over 200 pounds of powdered sugar, and spent 15 hours a day for an entire week making a masterpiece. He even special ordered a Super Mario Brothers brick cutter to get just the right look on each gingerbread brick. The gingerbread house will be on display at Presque Isle Downs throughout the holidays and is part of their Naughty or Nice promotion.

As always, Chef Hesse is a gracious, grateful, family man. He works hard but speaks often of his son and long-time girlfriend. He also speaks fondly of Eldorado Resort owners, the Carano Family. “Gregg Carano is like the father I never had. If it wasn’t for the Carano family, I wouldn’t be where I am today.”

You might be asking “Will we see Chef Hesse on TV again?” Short answer: YES, SOON! He would like his fans to know that the best way to get him back on TV is to tell Fox to bring him back. With a Hell’s Kitchen reunion show rumored to be in the works, who better to have come back than a two-time contestant that has completely changed his life? Let them know that you want to bring back Chef Hesse! And he is ready! “I want a chance to prove that I had it all along, but my body wouldn’t let me. I want to compete again and prove myself.” Feeling great and looking great at 155 pounds, his body certainly won’t fail him this time.

Let Fox know that we want to bring back #ChefRobertHesse

Good news, you’ll be able to get your Chef Hesse fix soon. In early 2016, he will be appearing twice on the Food Network. First, he gets another shot at Beat Bobby Flay, then battles for a chance to win $20,000 on Guy’s Grocery Games. We look forward to watching him battle!